Termites What do They Look Like- Find out here

I often get calls from people asking what do termites look like. I will tell you what they look like and show the difference between Termites and ants. The Subterranean Termite has been around for a long time and evolved over  millions of years. Termites live in colonies that have social organisation similar to ants and bees and have different orders which perform specific duties within the colony. All these duties of these individuals are for the benefit of the colony survival. Colony sizes vary from just a few hundred in some species to hundreds of thousands and even millions in mature colonies. In Australia there are about 300 different species but only around Eight cause damage to timber structures.

The difference between Termites and ants.

The Diagram below points out the differences between termites and ants. 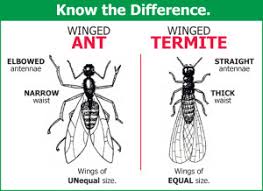 The difference between the ant and termite

The Australian subterranean termites resemble ants and this is why they are sometimes called white ants. Most termites range in size from 4-7mm in size and the giant termite has reproductives that are 35mm .They live in colonies that have a similar social structure to that of ants made up of several castes such as king, queen, workers, soldiers and the alates. Alates are the flying reproductive termites or swarmers  that come out at certain times of the year when it is warm and moist mainly between October-February.

The Australian subterranean termites are very secretive by nature. Some tend to build their nest out of sight such as in the crown of a tree or stump even underground within an enclosed patio or under concrete slabs which is ideal for temperature ,moisture retention, and humidity control within the termites colony main nest. They also nest in subfloors roof voids and even in your homes walls. Some species have visible nests like up in trees and on the ground.

Some species have visible nests 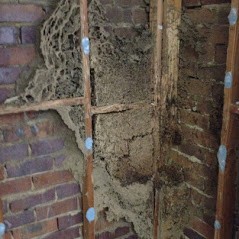 Termite nest found in the wall behind the hot water cylinder 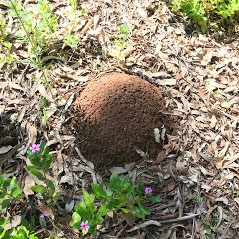 Microcerotermes nest on the ground is pretty typical of this species.

By nature, they are very destructive to timber and cause severe damage to buildings and timber structures.  Termites are  the most widely distributed and destructive timber pest in Australia. Their destruction accounts for over 70 % of serious damage done to homes, buildings and other timber structures and the repair bill each year is over one billion dollars. A Mature termite colony may have more than one million termites.

The Video below shows a termite nest in the roof void of this house which was only built 9 months ago... Pretty Scary!!!

The Worker is the engine room for the termite Colony. These guys are blind and never sleep. They are responsible for all the other casts within their colony, they feed everyone, look after the queen and her eggs and young, the King and Soldier Termites. The Worker never stops looking for new food sources and when they find it they will leave a pheromone trail for others to find it. So make sure your home has no conditions that attract them as they will turn up and destroy your house. 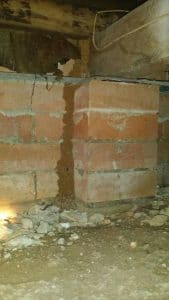 Termite mud lead in the subfloor

The termites have to maintain their colony nest in high humidity and temperatures ranging from 25-35 degrees C. If by chance they are exposed to dry heat or open air, they normally dehydrate and die within a few hours. So they prefer to live in constant darkness except for the annual Spring to summer swarms of the Reproductives the alates or as most know them as flying termites.
They also feed the rest of the colony. It is only the worker termite caste that can digest timber through the use of  protozoa in their digestive tract. They eat the timber and then regurgitate the  digested timber for the other termites to eat. The worker termites excrete this semi-liquid food for the other termites to eat as it is high in cellulose content.

This video shows the worker Termite hard at work. 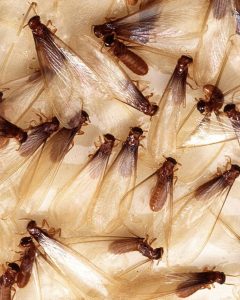 Termite Alates are the Flying Termites we see from spring through to summer. They have four large wings equally sized. They  have one of the most important jobs. Alates have the job of leaving the nest in flying swarms to find  suitable conditions to start a new Colony. They are the new kings and queens of future termite colonies. Being very weak flyers the alates are generally taken in the direction of the wind and become food for local predators. The survival rates for a male or female alate is very low and is less than 25%. They have a body length of about 7.5mm alongside two sets of equally sized brownish wings. Unlike ants they have uneven wings.

When resting, the wings lie flat and are usually about 11.5mm long. The alates then shed their wings soon after they land and search for conditions to start the new colony. You will know there is  termite nest nearby when you see thousands of these around your home or teir wings they have left behind. A common one is finding heaps of them or wings in your swimming pool.

The Soldier is always ready to protect the colony

So Soldier Termites is always alongside the worker termites in their constant search for new timber food sources. They  protect the worker termites from predators so that they are able to do their job well. They are  larger than the rest of the termites, the soldiers will rush to a broken open mud lead or hole in the nest to protect the workers while they quickly plug it, they even sacrifice themselves in doing their job in protecting the colony. Soldier Termites have heads that are darker to their bodies and have large pincer  jaws. Soldier termites enable us to identify which species of termites they are.

The king spends most of his life underground and his main responsibility is to mate with the queen and to release caste-controlling pheromones. Next to the queen, the king is the most important member of the colony when it comes to keeping the colony well populated. The King leads a protected life below ground, mating with the queen and releasing chemicals that control many different aspects of the colony.

The queen’s responsibility is to lay eggs and she can lay thousands a day. The Queen is a egg laying machine and she can live up to 15 years in some species which enable the colony to survive and grow. During her 15-year lifespan, a queen can lay more than 165 million eggs now that's mind boggling.